You’ve probably noticed I haven’t done a lot of general blogging. Truthfully I don’t know what to write. Sometimes I sort of have an idea for an entry I’ll think about it and end up rejecting it. Some ideas do eventually make it into blog form, but that’s actually fairly rare compared to the number of ideas that are rejected.

I submitted presentation ideas for PantheaCon 2018; I won’t know for a while yet if I’ve been accepted but I’ll certainly keep you updated. I’ve also been invited to present at SpiritCon, a new local pagan spirituality convention taking place at the end of February 2018. I’m looking forward to participating in this event and I hope that it will be successful. Their Kickstarter has a long way to go; if you would like to see a pagan convention in the Salt Lake City area (with programming for families!) consider supporting it and sharing the link.

In anticipation of vending at SpiritCon, I’ve been working on some new wraps and other things. 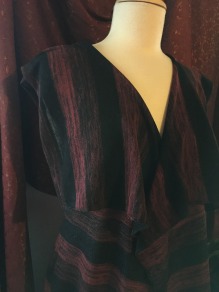 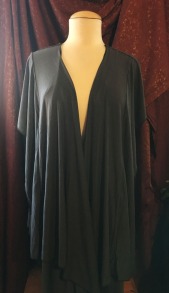 These are made with interlock fabric, so they’re soft and easy to wear and care for. They’re freesize (each listing mentions the back width measurement) and made with the intention of gender inclusivity even though they’re modeled by only one of my mannequins. Speaking of conventions, I’ve made these for some people who want an easy layering option when at events; sometimes rooms are too cold but not so cold that a jacket is required – you know the struggle. Something like this is a great solution that also looks nice.

I’ve had the idea to make ritual clothing for quite a while; in addition to making all of my own I’ve also done some sacred sewing for clients and friends. I need to find/make the time to get deeper into these ideas (but first I suppose I should finish existing projects, sigh). I’ll share pictures of anything that gets made.

So that’s what I’ve been up to.