As you probably know, various traditions within the Hindu religious complex are very near and dear to my heart. These traditions have taught and nurtured me, and played a formative role in getting me to where I am today. Before there was Kali, before I was introduced to Wicca, before I even had any witchy friends, there was Krishna. Why wouldn’t there be? He’s become a global presence precisely because He’s so darn lovable. His name means “all attractive”; He possesses all attractive qualities and attracts all intelligences towards Him. 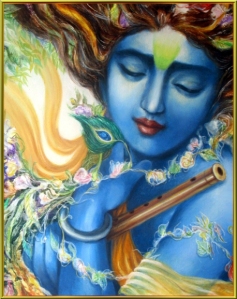 To use spirit work terms, Krishna has one hell of a call center. He’s got an answering service that can do just about anything. In my experience, He’s intensely difficult to actually get on the line. But really, He doesn’t need to take His own calls. As the cause of causes, He can just sit back and hang out. His heavenly realm is one of eternal springtime, dancing girls, and happy animals. As far as His doctrine is concerned, He doesn’t need to do anything; He causes other causes, and those emanations do the rest.

Everything I know about Krishna, including my own experience with His call center, tells me that He’s a benevolent, easy-going guy who loves to have His friends around. So when I did finally encounter Him, the conversation didn’t go like I was expecting.

A few years ago I really needed some help getting my spiritual life back in order. My relationship with My Lady had failed in the strangest and most unexpected way possible and I was struggling with all aspects of divine relationship. I decided to resume my bhakti studies because, well, maybe the relationship experts could help me. Since I’m fortunate enough to have a Krishna temple not 20 minutes drive away, I hauled myself down there to have a talk about my intentions. That’s just spirit worker courtesy; you have to stop at the gate, introduce yourself, and talk about your intentions.

Without getting into detail, the conversation was unexpected. I was told pretty much that my work would be tolerated but that I’d leave as soon as it was finished. For around a year I worked very hard with these Powers trying to get my own shit worked out and very gradually, it was. I was taught new ways of worshiping; a new practice was initiated and an old one resumed. Kali was back in my life after a decade-long absence. Eventually I was told that my work at the temple was done and so I stopped going. That was the agreement.

I didn’t stay gone, though, not forever. Very gradually I started coming back though nowhere near as frequently or as regularly as I had in the first place. I was mildly tolerated because I didn’t disrupt anything (or because My Lord didn’t disrupt anything, I’m  not totally sure about this). I think only once was I told to GTFO but after another several months I was told it was OK to come back. It was weird, not gonna lie.

Yesterday I stopped by the temple to pick up a book I’ve been looking for and encountered the guy who might be the lone staff at the moment. He was trying to politely suss me out with the usual questions: You chant? You have been initiated? I said yes, I chant; have for a long time. No, I haven’t been initiated; I’m just a friend. I meant that I was a friend of the temple, a friend of the temple community and the devotees but he says, “A friend of Krishna?” “Yes,” I said. This was true and it was as good an explanation as was required.

And suddenly there was this rush of warmth and welcome that just radiated down the hall from the temple room like a breeze. It was the most unexpected and most unlooked-for reaction. I have experienced years of barely polite toleration behind a massive phone bank of benevolence. I have been content with not receiving anything specific back from Him because I find Him charming and His lila inspirational; I don’t need anything else. As soon as I say, “Yes, I am His friend; I feel friendly towards Him,” everything changes. And this is the point of this long-winded story.

It’s very easy to forget that the Gods don’t know everything about us, even those with a press packet that includes omniscience. This knowing comes through exposure to one another and to relationship that is built with time and effort. Even after many, many years it’s important to speak plainly and tell the truth. This helps avoid misunderstandings like this one.

The Powers tend to respond to relationship. They will align themselves into position relative to how we approach. If we expect them to be hostile and violent, they usually will be. After all, there’s little motivation to reveal yourself as anything different when a person has already decided they know everything they need to about you. The Powers frequently will appear more or less exactly how we think they will; this is relational positioning and They all do it to one degree or another.

Would my time with Krishna have been different if I’d said at the outset how I felt? Possibly. Even probably. I assumed He knew. However, as a polytheist (and a spirit worker) I have to allow Him the space to have His own opinion about me and my presence in His space. There is tension with regards to the Powers that I’m closely aligned with, that much is obvious. I have to respect that.

However, everything changed when I made it clear that I feel positively towards a Power, that my affections are not specifically goal-oriented, and that my pleasure comes from keeping company with my Friend.

Can divine relationship be furthered simply by saying, “I like you; I want to get to know you; I want to be your friend”? Sometimes, yes. It clearly worked in this instance. My spirit work has been dominated by diplomacy and other forms of non-confrontational problem solving. It can get technical and fussy and sometimes there are actual for-real paper contracts involved. This incident was a reminder that low-tech tools are also valuable and powerful. Some Powers don’t respond positively to complex negotiations, either by nature or because they don’t think in those terms. In this case, a very complex and nuanced Power responded to one of the simplest relational negotiations of all: Friendship.

I’m going to remember this lesson.