Sometimes I’ll come across a book or TV show that strongly reminds me of certain aspects of spirit work. There are actually quite a few stories out there that people have found relatable to this particular path; some of them you may have heard of or ready yourself. These are some of mine. I’m always discovering new stories that really make me take notice. I sometimes even find moral lessons and teaching moments imparted in these stories; after all, the Work reveals itself. 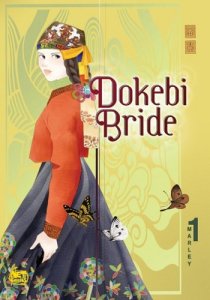 Dokebi Bride: This manwa series (Korean comics) follows Sunbi, a young woman born into a shamanic family. Raised away from the people who could teach her how to manage her gifts, she struggles to make sense of the spirit world on her own. Quite by accident she finds herself engaged to a dokebi, a mischievous goblin-like spirit who helps her in her work – in his own way, of course. Sadly, the English translation of the series halted several years ago. I don’t know if we’ll ever get the end of the story or even if it was ever finished up in Korean.

xxxHolic: This is also a comic series that was originally published in Japanese. Though the manga has some great spirit work elements to it, it’s really the anime that made me pay attention. Watanuki is a young man with the ability to see spirits and energy. He’s quite alone in this and struggles to live normally. He takes up an apprenticeship with Yuuko, a witch with power over time and space. Yuuko teaches Watanuki how his powers work and what they mean for the way his life operates. This title isn’t seriously heavy on the spirit work theme and adult viewers might find a show designed for teens a little dull or obnoxious but there are some exceptional moments that really get to the heart of this life. Watanuki helping a tree spirit, meeting the kitsune, and getting instructed to take fairy tales seriously are some of the moments that really stand out in my mind.

The Sybil: This book by Pär Lagerkvist fell into my hands very much by accident. My Lord tugged me over to a shelf of used books for sale at the public library serving the rural community I grew up in and told me to buy it. I might have gone an entirely lifetime never discovering this book but it was exactly what I needed at the time. Lagerkvist is a remarkable writer, even in translation, and the narrative really hit me. The story is about a young woman selected to serve Apollo at Delphi. As she is instructed in service, she falls in love with a young man. Their growing love threatens her sacred role and eventually leads to tragedy. It’s a strange, not altogether uplifting story for the pagan soul but it highlights the conflicted and ambiguous emotional relationship that we share with the Powers we serve and love.

Buffy the Vampire Slayer: Yeah, this is on the list. This is probably the spirit work story I’ve spent the most time with (possibly because it’s the longest of any I’ve listed here). I find I like stories about people trying very hard to cope with the demands of an otherworldly life and the complexities of a highly mundane one; I also like stories about people’s in/ability to manage a sudden intrusion of the Other into the familiar. Buffy is a superhero but one that has to cope with high school (and later college), employment (and lack thereof), family, friends, a never-really-happy love life, and oh yeah, coming back from the dead. I’d also add Angel to this list but mostly because the human characters are decidedly in the minority, which is a circumstance I’m rather familiar with.

Anyway, there are a handful of other spirit work stories that I keep coming back to. When I remember them I’ll do another entry on this topic.