I can’t tell you all about this new project yet, but I’m too excited to keep it entirely under wraps. I’ve been distracted from blogging by a couple important writing projects, one of which is my first significant output in several years. That’s exciting enough. This project is also all about Loki, which is extra exciting. 😀

This particular project will be released in waves, so there’ll be plenty of opportunities to snag a copy for yourself. At the high end I’ll be doing a limited release of special edition, hand bound books that will be signed and numbered, and dedicated in a special ceremony. At the low end will be an open ebook edition on multiple formats. Keep an eye out for an announcement soon, probably later this week.

I have some great news to share! Thanks to the generosity of donors, the fund fed by sales of the Loki devotional has reached capacity. It’s time for a giveaway!

This giveaway is for one copy of the handmade Loki devotionals that I have for sale on Etsy. These books are hand bound, so each one of them is entirely unique. Lush red paper with black and metallic gold marbling decorates the cover; this paper is handmade and gives each volume an even greater distinctive character.

The winner will receive one copy of the book and complementary shipping. This contest is open to international entrants; any additional shipping charges will be covered by me. Thanks to the generosity of our donors, we are already $9 towards the next giveaway.

To enter, all you need to do is comment on this post and say you wish to participate; please include your preferred email address, as well.

Entries will be received until 11:59 PM on Saturday, June 13. Everyone is welcome to reblog and share this post so as to spread the word as much as possible. Thank you everyone for you continued support of this devotional project. 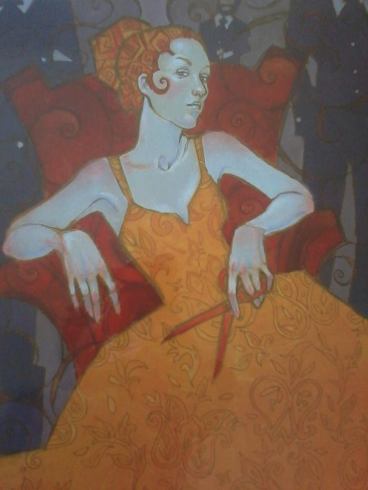 A couple recent posts by friends (specifically Beth’s “What do you seek from the divine?” and Heather’s “The Pagan Experience: Gebo”) got me thinking about who Loki is to me. That’s a very complicated subject and is actually one that’s difficult to talk about. For all that He is the center of my emotional and spiritual life, He doesn’t really make an appearance in a blog that’s primarily about my emotional and spiritual life. That’s because He is part of my most private life and this blog is as public a face as I’m comfortable having – on many days it’s more public than I’m comfortable with. But as a recent tarot reading reminded me, I am not the hidden hermit scholar. Or at least, I’m not only that.

END_OF_DOCUMENT_TOKEN_TO_BE_REPLACED

Any discussion about Loki is going to bring up His parentage of Sleipnir. This particular bit of tricky business is praised by some, sneered at by others. A rather more detailed discussion about Loki will bring up the accusation made by Odin that Loki spent winters under the earth as a woman either milking cows or nursing babies. A more in depth discussion of Loki may mention that He became pregnant after eating the heart of an unnamed woman burned for unknown reasons. A quite detailed discussion of Loki will mention in passing that He’s known to have given birth to a race of ogre-like female creatures or witch women. This is why those who love Him exalt His title of Mother of Witches.

All this lore-based information collects to form a distinctly complex picture of Loki’s gendered identity. People who love and worship Him are generally familiar with His penchant for flamboyant appearance, glam-rock attitude, and occasional crossdressing. This is all part of Him. Not all of Him, not even most of Him, but it is part of Him.

I want to talk about the feminine Loki. I can’t say the female Loki because Loki is not female, no more than She is male. These two designations are simplistic categories intended to sort biological life forms (though they frequently fail to do so in any meaningful way). Not being biological in a way we understand, Loki is therefore neither male or female (or anything else in particular). I feel it’s important to emphasize that no Power is male or female (or anything else in particular). I realize I may step on some toes by making this assertion and I know that that these terms are quite central to the understanding that many people have of their Gods. Though I don’t wish to diminish that understanding, this particular belief has certainly not been kind to many people and (I feel) rather limits the ways in which we as human worshipers are willing to engage with the Powers we love. Please realize I mean no disrespect. Moving on.

She’s lots of things. She is a swinging hippie chick with tight jeans who kisses you hard in a field full of wildflowers and stale incense smoke. She is a pale leggy transsexual with beautiful tits. She’s a witch woman, hot and red and drenched in magick. She is an exiled queen keeping court in a cave embedded with crystals, dressed in rags and tatters because Her crimes negate Her tributes. She is an impoverished, lonely mother bent on survival at all costs. She is a tender, loving embrace to a monster who has known no family but Her.

She is mother, lover, sister, sweetheart, witch, queen, companion, heartmate, helpmeet. She is a trickster beauty, Bonnie to my Clyde. She is a bold and arresting presence, Sheila Franklin to my Claude Bukowski. She is sorcerous, Morgana le Fae to my Mordred. She is the hot red control of focused attraction, a vision in cherry red vinyl.

She is protective, loving, fierce, powerful, regal, scrappy, poor, lonely, forgotten, heavy, rich, deep, and lusty. She is red roses, fire-lit bronze, the sound of bells, the scent of incense, the rock wall of a cave, deep bioluminescence, the treasures deep beneath the earth. She is heat and pressure and the close spaces where magick is born.

She is beautiful and I love Her.

Though my darling mylar-clad B-movie cosplay goddess is as brilliant as they come, She is also rather shy. He protects Her closely and She doesn’t come out to play with everyone (except when She does). In Her is much of the damage He carries. You have to be gentle and exceptionally loving when asking Her to visit. The best thing to do is to simply ask Him. She might show up, She might not. She might show up without even being asked (since She is Loki, after all). Offer Her light. Offer Her comfort. Offer Her a blanket and a soft place to sit. You can coax Her with compassion but be patient. Her blessed presence is shared on Her own terms. Let Her take the lead and She will show you many wonderful things.

I had the opportunity to listen to a short presentation of Loki made by Dagulf during Pantheacon 2014 in the Heathen Hospitality Suite. (At least, I believe it was him. I don’t recall the name of the speaker but the perspective put forth in the following article is the same as the presentation so I’m simply drawing a conclusion.) The suite was quite crowded after the presentation so I didn’t get to speak with Dagulf though perhaps I’ll have an opportunity in the future.

The article puts forth a detailed, well-researched consideration of Loki’s fiery role in the historic Norse tradition as extrapolated by a parallel examination of the Vedic Agni. This information may help inform the practice of those working within a Norse framework and may also help to clarify the practical and beneficial role that Loki plays within it.

Due to the pointed way in which Loki doesn’t consume the bones in Snorri’s account, it is my belief that in antiquity Loki (like Agni) was regarded to be the personification of the fire of cremation and sacrifice. In Snorri’s story, Loki represents the holy fire of cremation that separates bones from flesh, which competes against Logi, who personifies the mundane wildfire that indiscriminately eats whatever is laid in its path.